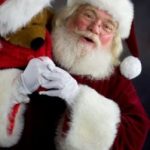 This is a question all parents prepare for. It can be a daunting question, having to out oneself for years of deception, and explain the delicate line between make-believe and a lie, along with not wanting to see your child saddened by the truth. To explore this dilemma so many families face, first I will tell you a story, and then I will share what I think is some good general advice on this topic. This is a true story.

I wasn’t worried about the inevitable day my daughter would ask if Santa was real and I’d have to tell her Santa didn’t exist. I’m a psychologist with a specialty in children and families…I had this one down. This is how the conversation was basically going to go:

Page: Mom, is Santa for real?
Tina: Well, what do you think Page? Do you think Santa is real?
Two possibilities then:
Scenario 1:
Page: Hmmm, I don’t know. It seems kind of impossible. Some of the kids at school were saying he isn’t real, and I don’t really think he is either. That’s my best guess.
Tina: You’re right Page… (go on to explain origins of Santa and such)
Scenario 2:
Page: Hmmm, I think he is real. I mean, how else would all of those presents get under the tree every year?
Tina: You’re right Page… (and Page continues to believe probably about another year; this all occurring of course still in an age range where it is developmentally appropriate)

I even knew close to when it would happen. Based on when kids often ask and my daughter’s general maturity level and such, I estimated 3rd grade, but before Christmas in 3rd grade. Some kids at her school knew by 2nd grade. I knew Page would still believe in 2nd grade and she did. Kids don’t talk about or think about Christmas much after it passes, so I would probably be asked between Sept-Nov of her 3rd grade year. At least that’s what I thought…

About 2-3 months after Christmas of Page’s 2nd grade year, she asked me. This is how the conversation actually went:

(To set the scene, Page and I are eating dinner, just us two this night.)

Page: Mom, I’m going to ask you a question, but first I want to remind you of something. You need to remember that mothers never lie. You know that, right? Mothers never lie. OK?
Tina: (likely with a shaky voice because I know I am being set up for something…) OK.
Page: Hazel said there’s no Santa Claus. I told her I don’t believe her, there is a Santa. But she said her mom even told her that was true, there is no Santa. And mothers never lie. So… are you, or are you not, Santa?
Tina: (caught totally off guard at the under-the-spotlight-inquisition-style questioning, grasping at what to say…) Well, what do you think Page? Do you… (Page interrupts, annoyed)
Page: We’re not talking about that mom!! We’re not talking about what I think! We’re talking about mothers never lie, and are you Santa?
(Small pause of time while I try to figure out what to do, while Page stares me in the eye. But I have to think really quickly. I’d prefer to mull it over, chat with my husband about it, ask the other child psychologists at the office what they’d do in this case, talk to some friends… but here I am. My 7-year-old has ambushed me. I decided it was more important Page continue to believe that mothers never lie than it was for her to believe in Santa. Even though in her conversation with Hazel it showed she still did believe, so this was not fitting nicely into my plan of how to do this ‘right’ and not disrupt her belief in Santa until it was shaky.)
Tina: Yes Page, daddy and I are Santa.
Page: (brief look of total shock, then she composed herself because after all she was 7 and in 2nd grade, so totally cool) Oh, yeah, well, I mean, I kinda knew…

I think the best advice I can give parents is to be prepared and know what you’re going to say, and trust yourself to wing it if the plan gets derailed somehow. The original ‘plan’ of putting it back in the child’s court is a great plan and very often works. It’s nice in that you let them initiate the conversation, and you tell them when they have already started to let go of the fantasy a bit anyway, so it is a much more gentle let down. It seems nowadays most children will stop believing sometime between 2nd to 4th grade. There is no real harm if they stop believing earlier, though if your kindergarten child starts announcing to the class there is no Santa Claus you may get a call from the teacher! Children of any age have to be directed as to how to keep this knowledge to themselves once they have it; and failing at that directive is perfectly normal. It is a hard secret to keep at their age! A young child should not be reprimanded for telling there is no Santa, because it is extremely difficult developmentally to keep an exciting secret at those young ages, so really when we ask them to we are already asking them to do something hard. Now, if your 12 or 16 year old tells a child, that is not nice. The harm in letting a child believe for much longer than others do is the high risk of the child being teased and ridiculed by their peers when they say something like, “I’m excited to see what Santa is going to bring this year!” when everyone else in class knows there is no Santa.

Because it can be a bit of a let down, plan to have something fun to talk about to switch to (funny Christmas-past stories) or be ready to be spontaneous and do something fun. Explain to the child that pretending there is a Santa Claus is a fun tradition that came from a real person, Saint Nicholas. Most children will have heard of Santa also referred to as St. Nick. Tell them how St. Nicholas was known for his generosity and gift giving, and he especially liked to give gifts to children. Thus it is fun for parents to celebrate that giving spirit through the story of ‘Santa Claus.”

… After Page so (unconvincingly) told me she “kinda knew” Santa wasn’t real, I told her the story of St. Nick. Her disappointment faded and she perked up again. She still needed to believe in something real, and Santa Claus was real (well, sort of), as St. Nick, a very, very long time ago.

Originally published at chapelboro.com on December 12, 2013