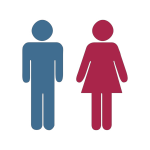 At six years old Page expressed a hilarious take on male versus female genitalia. One night as I put Page to bed and lay down with her, she asked me to play one of her games, asking, “What is something you would NOT want to be.” This particular night I was tired and said, “Mommy is too tired to think of something. Why don’t you tell me what you would not want to be.” And here’s where the conversation went from there:

Page: I would definitely not want to be a boy.

Page: Well, what’s that floppy thing they have, you know, on the front of their body?

Tina: Do you mean the penis?

Page: Yea. I would DEFINTELY NOT want one of those! (Page expressed this quite empathically. I was curious why not… and trying not to laugh because she was serious but this was getting funny.)

Tina: Why wouldn’t you want a penis?

Page: (She described this with a very serious demeanor.) I mean, it just hangs there, floppin’ around. And it’s right on the front of their body! They have to get dressed with that thing there. That just looks like it would get in the way.

Tina: Oh, yeah, you’re right, I can see that. It does kind of look like it could get in the way.

Waving her hand slowly over her lower body, Page finishes with: It’s much better to be a girl. Nice and smooth.

This is one of the funniest conversations we’ve had, and it was one of those where as a parent you have to stay serious because the child is serious, and too young to get the humor if you laughed. It can make me giggle at any moment just thinking about it: “That just looks like it would get in the way” … “Nice and smooth” … Hilarious.

And she does have a point. I have never had to adjust my vagina when putting on a pair of pants.

Originally published at chapelboro.com on May 30, 2013