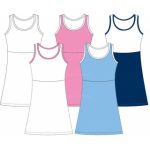 In elementary school Page had the same response when being asked if she wanted to join a soccer team or a basketball team: “Why would I do that?!! The outfits are not pretty!”

Oh. Well there’s an angle I hadn’t thought of.

She went on to explain that she liked being on the swim team because you get to wear bathing suits which are attractive, she liked running because you could buy pretty running clothes, and she liked karate because the gi (i.e., karate uniform) looked really cool.

So as a parent I had to ask myself, “Is this criterion upon which I should allow her to make a decision about sports?” It seemed pretty flimsy as criteria. But it is true to her personality. From preschool she was designing and making clothes for her dolls, creating pop-up books, and designing and building doll houses for which she also made furniture (to scale!) and characters to live in the houses. At age six she made her father a doll house with a working elevator. She would draw dress designs and piece together material scraps to design dresses for herself. At age eight she had her first dress design used as a pattern by a seamstress (Grandma) to make her a dress. She was so proud when her dress design became a real dress!

So how does any of this relate to sports? It is that when I let my mind wander I realized this is perfect criteria upon which to decide upon sports if I am allowing her to be herself and follow her internal motivators. She is an artist and a designer; she sees the world visually and that motivates her. She is intrinsically motivated by visual stimulation and an internal drive to create from visual inspiration whether that is clothes or buildings. And intrinsic/internal motivation is of far more worth than any external motivation I could try to provide. In the end I decided in a time when parents lament about not being able to get kids up and moving and away from the computer or iPad or whatever, I should be thrilled Page is highly active and swims, runs, and has taken karate. As long as she exercises and is active I am not going to try to push her into activities that for whatever reason she doesn’t like. Which doesn’t mean not nudging her into exercise…I did take note of her internal motivators and started talking her language; I suggested tennis. Those outfits can rock!

Originally published at chapelboro.com on April 5, 2013