Shake That Fist and Lean In 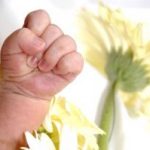 This past week the new book Lean In got a lot of attention. I haven’t read it yet but the premise appears to be that in part women still don’t hold more leadership roles because they don’t ‘lean in’ to promote themselves into such positions. Rather women lean back for practical reasons such as planning to raise children, and for personality reasons such as having to handle being disliked and not being comfortable being disliked. To the latter, research shows women in leadership roles are disliked by both genders far more than men in leadership roles. As the mother of a girl this type of thing really gets my attention. I want Page to have every opportunity and it is a reminder to some extent we all create our own opportunities by what we pursue. I want to raise a strong woman.

If parenting her so far is any indication, she’ll be one. She is strong spirited and for years I have always been aware I am trying to keep her behavior in check while not deterring an innate strong will that I hope will help her be a strong woman. As all parents quickly learn, each child is born with a unique temperament that they pop out of the womb with and we had no part in creating. When Page was only about eight months old, and still slithering on her tummy like a little snake, she slithered over to an outlet with a cord plugged in and reached up to grab the cord. I said “no Page” in a firm voice. Keeping great eye contact, she returned quite a glare, raised one fist into the air and shook it at me! It was hilarious! (Though of course I kept my serious parent look and didn’t laugh.) She did that a few times before she could talk to disagree with me, and I found it interesting a creature so small would shake her fist at larger humans. My sister saw her do it and we were laughing, me noting that was her “Fight the Power!” fist-shake, and my sister pointing out, “Yeah, but right now you’re the power.”

…But someday outside forces, or her own internal fears, may be the power she’s fighting. So I never did really discourage the fist shake.

Originally published at chapelboro.com on March 21, 2013