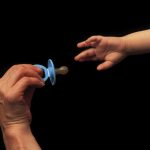 I want to start off by saying I have no stance on whether a child “should” or “should not” have a pacifier. But it does seem to be something all parents make a decision about. I thought a pacifier seemed better than not, in that children without them may suck their thumbs, which seemed would be harder to stop when you wanted that form of comfort to end since the thumb is attached and the pacifier you could take away. So it seemed like a more logical choice.

I tried to give Page a pacifier as an infant and she spit it out, so I assumed she didn’t want one. Shopping with a friend with grown children one day, I learned I was wrong. Apparently I just didn’t know how to get her to suck it. The first time you have to hold it long enough for them to get a grip on it or they inadvertently spit it out. This reminded me of the nursing coaches at UNC who came in, held Page’s chin down to make her mouth very wide open, and rather forcefully attached her to my breast. She and I had not been doing so well on our own without that direction. Makes me wonder how the human race survived. I guess there always have been the coaching and advice of those who went before us for us naive new mothers who are bumbling along.

So there we were, with Page now a pacifier baby, which was good I have to say because in lieu of the pacifier she had never wanted to stop breastfeeding sessions, me being the human pacifier, which had been getting overwhelming. All was well with the world, until we had to wean her off the pacifier. My husband’s approach to this was like much of his parenting, which is that it will just magically happen as a normal course of life without intervention by us. If you’ve read earlier columns you’ll recall he wasn’t concerned about potty training since he’d never seen an adult in diapers. Similarly he didn’t work with anyone who had a pacifier so he thought it would just end someday. However, I didn’t want her to have her pacifier as long as he had his; he recalls as a child being old enough to know kids didn’t use them anymore, probably 5 or 6, and hiding it when his friends came over. I thought we could at least spare Page that social awkwardness.

But let’s face it, that pacifier wasn’t just for Page, it was for us too. It calmed her and soothed her and kept her quiet at times that was really helpful. Holding it back resulted in her fussing and demanding she have her paci. This whole weaning thing was going be a literal headache for me it seemed certain. Let’s face it; I had come to love the pacifier. One of the best inventions of humankind, really. The pacifier was my friend.

Nonetheless I did my duty and planned slyly to wean her when away from Peter, and with a plan I thought was foolproof. Page and I were going to Maine to visit family, and so once in Maine, when she asked for her pacifier, I told her there were no pacifiers in Maine. This came as quite a shock to her three-and-a-half-year-old brain. “What?!” she complained! She couldn’t believe it. But I assured her there were none in Maine and they weren’t allowed there either. I had created a scenario hard for her to argue against, whereas at home she just cried and pitched a fit when I tried to say no. I could see her little brain trying to grasp this, and frankly to look for holes in my story and plan her counter attack. But she accepted it. Later as we went to bed was the real test. She started to lightly cry and asked for her pacifier, which I reminded her there were none in Maine. We were sleeping together while there which I think helped soothe her a lot. She tossed and turned more than usual, but went to sleep. And that was it. She never asked for her pacifier again, not there or a week later when we got back to NC. If only all parenting tasks were that easy! My plan worked seamlessly! Bam!

And while I rocked the pacifier weaning, it is only in retrospect I am able to fully enjoy that victory. At the time, I was too anxious worrying what meltdown might come that I was supposed to handle on my own, pacifier-less, and truth be told I kept hidden pacifiers in my purse and the car just in case  some moment made ME regress and reintroduce the pacifier. Thankfully that never happened. My weaning was complete.

Originally published at chapelboro.com on January 23, 2014