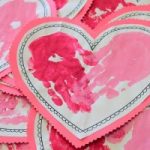 I remember my first crush very well. It was in kindergarten and his name was Michael. I used to chase Michael on the playground and he would let me catch him, which as we all knew meant he liked me too. Well, either that or I had fallen for a poor runner.

If you think the hair-flip is a learned behavior, I’m here to tell you it is innate. The first time I noticed Page noticing a boy was in kindergarten too. She used to watch excitedly for me to pick her up and run to me smiling when I arrived. Until the day she was walking with John. There I was, smiling and waving, and she walked right by me. I don’t know if she was ignoring me or didn’t see me, so engrossed was she in John. As I watched her she was smiling, laughing, and gazing on him as if he were Adonis. Then she literally did a hair flip!

But John was not officially her first crush. He was but a passing flirtation. In first grade she had a crush that lasted a full year, which is a phenomenally long time when you’re six years old. I took the opportunity to instill teaching moments and subtle brainwashing. For teaching, I queried her as to why she had a crush on Ned for so long. She explained he was smart and kind, which I thought was a terrific answer, and demonstrated my brainwashing while playing Barbie dolls had paid off. For years when playing dolls, whenever Page wanted to play marriage, I would direct the conversation so the dolls talked about qualities that made a good husband. Things like kind, hard worker, intelligent, fun, honest, etc. made my list. Though one day when I queried my 4-year-old daughter why her doll was marrying the price, she sighed exasperatedly and replied, “Mom, he has a castle!” Her tone clearly showed anyone would know why you’d marry that guy. Very funny.

Back to the brainwashing during her first crush, I focused on telling mom e-v-e-r-y-t-h-i-n-g. Because, as I explained assuredly, that’s what girls do, they always tell their moms everything about their crushes. Page thought this was great fun, and she’d snuggle up in bed with me and kick her dad out, proclaiming “girl time!” It was time for girl talk. Yay! This is how I learned of her plan to kiss Ned. Kiss him?! She was only in first grade. Page explained to me one night she had decided she was going to kiss him. She was feeling nervous about it, but thought it was the right time. She had a plan and was going to do it during a PE class in which they had yoga, which while I’m not sure why, maybe it was because he had said he “liked her” in a special way during a previous yoga class. All I could envision was the call from the school that would ensue! Reading the papers you heard horror stories of kids being suspended for such “sexual aggression” nowadays for what people used to know was developmentally normal and innocent behavior. I tried to nonchalantly explain to Page that most people had their first kiss when they were older, so it would probably be best just to wait a while. She contemplated that quietly for a minute, then announced, “No, I’m not waiting. I’m doing it. I’m going to walk up to him and kiss him.” Oh God!

I wasn’t sure how to respond. Tell her not to = I just made him into forbidden fruit. We all know how that goes in life! Plus if I forbade it, she might stop talking to me about her thoughts and feelings around boys, when I’d done such great brainwashing to get her to tell me everything! So I decided to leave it alone. I did not tell her what to do. In the end she was too anxious to initiate the kiss and it never happened. Or, well, at least that’s what she told me. 

Originally published at chapelboro.com on February 14, 2014