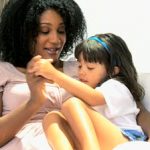 I have often joked to others and myself over the years with regard to parenting that, hey, no pressure, but you are now the primary role model for a developing human being. You are their role model for what it means to be a good person (good spouse, good daughter/son, good worker, good friend, etc.). Right, no pressure! You can see the primary influence parents have on children in how children spend their entire lives comparing themselves to their parents, i.e., “I am like my mom or dad in these ways, and I am not like my mom and dad in these ways.” Whether the parent-child relationship is terrific or tragic, the central comparison point from which people analyze themselves is their parents. Heavy stuff.

When Page was about five-years-old she began writing songs and wrote a song about me. It was very sweet, talking about how she loves me, with a refrain about how I am role modeling to her, showing her the way. It was my Mother’s Day gift and she sang it to me, complete with a big finish! I of course loved it! I also didn’t realize before then that she really knew or understood the concept of modeling behavior. Boy, now the pressure was really on if she was consciously watching me doing my job.

A few years later a speaker suggested to the crowd that we be certain our children knew what our core values were for them, what we hoped for them or thought was most important. As I sat listening I recall thinking, “uh-oh,” because I was pretty sure I had not articulated for Page clearly what I thought the two most important ethical ideals were. I mustered the courage to follow the suggestion to check in with our children, even though I was pretty sure I was going to fail this test. Still I reasoned, I cannot avoid this failure, I must face it head on and just use it as an opportunity to open dialogue with Page about my ethical ideals.

So I went home and over dinner explained the speaker I had seen had suggested we check in with our kids to see if they knew what we thought were the most important things for them, big things like how to live life, and that it was fine if she couldn’t think of anything, I was basically just wondering. Without missing a beat Page said, “Oh mom that’s so easy! Number one is to be kind to others, and number two is to be, I forget the big word, but it means to be able to take care of yourself.” “Self-sufficient” I responded, though I could barely contain my glee! She knew! I was amazed. “Page,” I asked, “How do you know these things? I’m so happy you do! You got them exactly right, but I didn’t think I had done a good job of telling you these things specifically.” Page replied, “Mom, you say them, like, ALL the time, I mean, ALL the time. Of course I know.” It was a really warm, connected moment for Page and I, and funny too since she could see I was surprised and she was amused by that.

I guess I had been thinking about it macro versus micro. I had not sat Page down and had a big “serious talk” with her about what I most hope for her, i.e., that she be kind and self-sufficient. But I had constantly directed her in micro ways, commenting on whether she or others were being kind or not, nudging her to make kind choices, and talking in general about the importance of being self-sufficient. Micro comes from the Greek word mikrós meaning “small.” I suppose without trying it is the small things we do every day that model to our kids and unwittingly provide messaging for what we believe is important for them.

Originally published at chapelboro.com on January 2, 2014