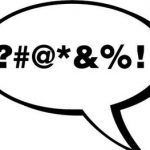 When Page was about three years old my friend Ingrid and I were driving with Page to Ingrid’s beach house. It was about a three-hour drive and Page was getting bored. In particular she had tired of our music and started asking for her music to be played. But the reality was we had played kid music for a good bit of the trip and had not been switched to a regular radio station for very long when Page started complaining. Complaining soon moved into whining when I repeatedly said ‘no.’ I explained it was our turn to pick the music for a while because she had already had a long turn. After trying to wear me down to no avail, Page exclaimed in angry exasperation, “I’m sick of this crack!”

Ingrid thought about that for a second and burst into laughter, realizing Page meant, “I’m sick of this c-r-a-p!” And realizing Page had to have learned that expression from somewhere…

Meantime I’m trying to tell Page that isn’t an OK thing to say and not to say it, all the while thinking how funny it is to try to explain to a child not to say something they’ve heard you say. And to complicate matters she’s said it incorrectly, which somehow makes me worry she’ll say it wrong on the playground and her friends will make fun of her. Swearing is bad, but swearing incorrectly in front of your peers and getting teased is also bad. So my conversation with Page goes something like this: “That’s a bad thing to say Page. You shouldn’t say that. But if you’re going to say it, it’s ‘crap’ – as in, I’m sick of this crap, not crack. But don’t say it. But if you do say it, it’s ‘crap.’ With a ‘p’ at the end, not crack, crap. Which is a bad word we shouldn’t say. So don’t say it.”

The best thing about this conversation was Page seemed to realize there was something very odd about it, because Ingrid was laughing and I was going back and forth with my don’t-say-it-but-if-you-do-say-it explanation, thus it completely distracted Page from complaining about the music and we had a nice quiet trip the rest of the way. Undoubtedly while my three-year-old mulled over the difference between ‘crack’ and ‘crap.’

Originally published at chapelboro.com on February 15, 2013