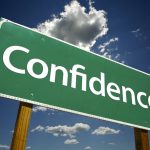 When I was growing up I learned a little ditty about confidence from an Elvis movie. (Well, embarrassingly to me as a child, I learned every song from every Elvis movie and can probably quote all the dialogue as well. We also had Elvis photos and an Elvis lamp. In modern nomenclature – OMG. Mom was a fan.) It’s a great little ditty though and I have found myself on more than one occasion singing it to Page and teaching it to her so she could sing along.

“Remember the tortoise and the hare, who had that famous race? Speedy hare wound up nowhere, and tortoise took first place. ‘Cause she had confidence, a little thing called confidence. There’s no job too immense when you’ve got confidence.
With a C and an O and a N and a F and an I and a D and an ENCE.
Put it all together, and what have you got? CONFIDENCE!”

It occurs to me as I write this that I once tried really hard not to laugh as a man in a booth next to me explained relationships to his children over ice cream by saying quite seriously, “You can’t always get what you want, but if try sometimes you just might find you get what you need.” Poor guy, he was really struggling with their questions and resorted to 1960s rock and roll, the kids nodding along looking slightly less confused than they had before he began his explanation. Yet here I am parenting via a1960s Elvis musical.

Should this make me feel more or less confident as a parent? Because like all skills or traits we try to instill in our children, I believe role modeling is way up there on how it gets ingested by the child, so Page learns about confidence in part by watching how confident I am, or am not, as a parent. It’s a tricky role to be confident in, isn’t it? On one hand I feel really confident because I’m trained in child development; others might feel really confident because they had great parent role models growing up. But on the other hand raising a human being is such a weighty responsibility that it seems to defy confidence. How could someone be 100% confident at such a lofty goal?

Funnily enough Page was certainly confident enough to comment on our parenting. One time in elementary school her father and I agreed to take her to an action film rated PG-13 even though she never saw violent films. (OK, side note, not blaming here, just pointing out it was his idea and I went along, so I am claiming slightly less accountability for this bad idea.) His logic was he grew up reading comic books and they are not ‘scary-violent’. In retrospect I have no idea why that made any sense to me. Half way through the film Page asked me to leave which we did. She and I went to dinner and she said to me, “Really? You thought that was a good idea?” “Not our best parenting choice?” I inquired. “No, not your best parenting moment,” she agreed.

Some days with Page I am attentive, kind, empathetic, funny, engaging, teaching, patient, high-energy fun, interactive, silly, and could win a Great Mom Day award. Other days I am cranky, inattentive, work too much, distant, want to be left alone, overbearing, petty, and am (barely) skirting by on good-enough mothering. Occasionally I even really screw up and take her to a movie she isn’t ready for.

Thankfully parenting isn’t a sprint and overall I’m confident I’m doing well in the marathon; in fact the tortoise just happens to be my favorite animal. The wonderful simplicity of it is just by the fact that I think about confidence in parenting, my confidence is naturally growing as by-product, as is Page’s confidence as she watches and learns. And learning certainly doesn’t have to be boring! Sometimes it is silly and playful, such as parenting via the Rolling Stones or Elvis Presley, or the commentary of an elementary school child.

Originally published at chapelboro.com on June 13, 2013