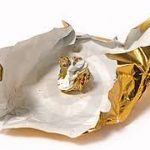 Our guest room has a TV that from a young age Page has been allowed to watch cartoons on Saturday mornings. One Saturday morning when she was about three and a half years old I was tidying up the room while she was watching TV. Though we hadn’t had guests in a while, I absentmindedly lifted the cover to the clothes hamper, and notably in my peripheral vision saw Page freeze, like a deer in the headlights. Peering inside I saw several empty chocolate wrappers. The evidence was clear…she had been taking chocolate from the kitchen without asking, sneaking it into the guest room, and putting the trash wrappers into the hamper instead of into the trash bin where we would have found them.

Suddenly Page says in the most robust, happy voice, with a wide full-face smile, “Mom, do you know what day it is?!” I turn to see her smiling ear to ear, the demeanor of the most joyful showman on earth, awaiting an answer. “No,” I say, “I don’t know what day it is.” “It’s hug day!” she chimes, arms spread wide; “Give me a hug!”

Now, clearly I am being played like a fiddle, or at least that is the blatant attempt. She has been caught with irrefutable evidence of candy thievery. Candy-without-asking. It is clear she knows this is wrong by the fact she hid the empty wrappers in the first place and the look of shock and horror on her face when she saw me find the evidence. I should stand strong and give her some lecture about her misconduct. However, (1) she’s just so darn cute, (2) I’m fairly impressed by her savvy at trying to manipulate the situation (note to self: I must try to harness this ability so she learns to use her powers for good as she ages…), and (3) it is really hard not to take chocolate once you know where it is.

So I lean down and scoop her up into a big hug. As a mom I believe in taking every hug and kiss I can, because they grow up so quick and at some point the hugs and kisses and snuggles become less and less. So I never pass up a hug.

But I also let her know accepting the hug doesn’t mean she pulled one over on me. After the hug is finished, I move ever so slowly over to the hamper again, keeping my gaze on her. Without looking at the hamper and instead keeping my eyes locked with hers, I reach into the hamper and take out the chocolate wrappers, saunter slowly across the room to the trash, still locked eye to eye with her, and drop the wrappers into the trash without losing eye contact. I think the “I’m-watching-you-kid” message was pretty clear. Sometimes nonverbal messages can be even more effective than a lecture. And, I still finagled a hug out of the deal.

Originally published at chapelboro.com on June 28, 2013