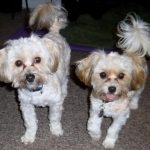 The decision to get pets is not an easy one as a parent, because it introduces another caretaking responsibility into the household. One that your child swears they will help with, but in reality you know the child won’t be any better at doing that consistently or without prodding than they are at doing other chores. As a very young child, Page asked for dogs for several years, never wavering by throwing in possible other pets as a choice. We did think since Page does not have siblings it would be fun for her, it would introduce at least some level of responsibility for her, and it would liven up the house. Peter is allergic to dogs, but like the overly-indulgent dad he is he dutifully tried, enduring trips to breeders where he would let so-called hypoallergenic breeds crawl all over him, then he’d promptly have an allergic reaction. Finally we found a breed he is not allergic to after much looking, Cavenese, which are part Havanese and part Cavalier Spaniel.

All of this looking was kept secret from Page so she wouldn’t get her hopes up. Once we found the dogs and bought them, we planned to go pick them up in a couple of weeks. The night before pick up Peter was out with friends, and I had a panic attack about the dogs. It occurred to me I would now have another thing to take care of, which would probably tip me into insanity. I called Peter at the bar:

Tina: We can’t get the dogs. I cannot take care of one more thing. I run a business, I take care of Page, and the house… I can’t do it.

Peter: It will be fine…

Tina: No it won’t. No it won’t! I can’t add anything else to my plate. I can’t have to learn about their needs, and find vets and pet sitters, I can’t do it.

Tina: No you won’t, you never do anything you say you will. Have you hired one babysitter in six years? No, not one!

Tina: I don’t believe you. Page doesn’t know yet, let’s just tell the woman we aren’t getting the dogs. (and so it went, on and on…)

Peter calmed me down and somehow convinced me he would be the primary caretaker of the dogs. He promised since I have been so with Page he would be so with the dogs. And he has actually stuck to his promise. … It seems in my state of panic I may have not been thinking quite clearly, and was perhaps a tad bit overly critical of his level of involvement in family chores. Well, that or after seeing me hovering precariously close to insanity he decided he’d better get more involved.

Peter is outside every day at the crack of dawn in his robe with the dogs. It’s hilarious. Well, not that I see it because I am asleep… but I visualize it and it’s hilarious. 

And Page, well, of course she adores her dogs! They provide her all we thought they would – endless fun, companionship, liveliness, and a sense of caretaking responsibility. And she sees her dad in a very positive light as she watches him be primarily responsible for the dogs; she really appreciates it. It was the best decision we ever made, and I am ever thankful my husband talked me down off the ledge during my panic so Lily and Ryder could join our family.

Originally published at chapelboro.com on May 9, 2013