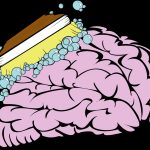 I’m a fan of brainwashing children. We really only get these few years where they’ll (perhaps) believe anything we tell them. People like to call these attempts at influence by kinder gentler names, but I like to call a spade a spade, and it seems to me trying to put ideas in another human being’s head so they think like you (i.e., hold your values, beliefs, choices, etc.) is brainwashing. Which I totally support. 

I was happy to see at age eight that some of my brainwashing appeared to be effective!! Page loves to play games over meals, and we were playing 20 questions. I was trying to guess a person she had chosen. When we narrowed it down to a boy in her grade, I asked if it was a boy she had ever had a crush on, and she replied emphatically there was no way she could have possibly had a crush on him. Later after the game was over I asked why it was impossible for her to have had a crush on him. She explained, “Mom, I just met him like six months ago when he moved here! I mean, I haven’t even known him a year yet. I don’t know what he thinks about things, what he likes to do, what he wants to be… So obviously I couldn’t have a crush on him yet!”

Isn’t that wonderful?! Perfectly in line with my brainwashing! (If only my adult friends would listen when I try to explain I don’t believe in love at first sight because you have to know someone to know what you love.)

Page didn’t stop there. She then added, “Plus I’m not a teenager. I mean, they’re crazy! The girls are all like – ‘he’s so hot’ – and they have a crush before they even know anything about the boy!” Hmmm… first of all, how does she know the phrase, “He’s so hot” at her age?! That aside, there is clear foreshadowing here to her teenage years, when hormones will stampede my brainwashing. Alas, my excitement about my brainwashing having worked so well was short-lived by Page’s nod to future ages. During those years I think my husband’s threats of banishing her to the Greek village and the fear he will instill in her dates will be more effective at helping her make good decisions than my brainwashing.

Originally published at chapelboro.com on March 12, 2013