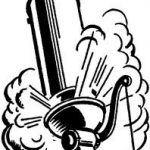 When Page was five-years-old we went to Moscow for a few days. She was in a phase, and her ‘attitude’, i.e., talking back, being sarcastic, not doing what asked, etc., had been pushing her father’s buttons for several months, and a few days in the close quarters of a hotel induced insanity.

One evening I went to the Bolshoi Theatre alone because I didn’t think Page could sit through the ballet at her age, but I didn’t want to be in Moscow for what was probably a once in a lifetime visit to the city and not see such a famous ballet company. So off I went on my own, only to return to…

Page is asleep. Peter is irate. Seething. He looks like a volcano that might erupt any moment. (This is a look all parents know at some point.) He goes off into his angry soliloquy, with components something like:

“I’ve had it with her! I have h-a-d it UP TO HERE with that child! What’s wrong with her?! She is so disrespectful! She looked at me and said ‘no’ with total attitude! Total attitude!! Looked right at me, as if that’s how you talk to a parent! As if I should cow tow to her! I never talked to my parents that way! Do you know what kind of trouble I would have been in if I had talked to my father that way?!!” … and on and on it went … but then, the good part, the hilarious insanity set in…

“I told her, I laid it down, I said Page that’s it, that is IT, no more Mr. Nice Guy. You want to be bad Page, well that’s fine, you’re about to meet Bad Daddy!”

I cannot tell you how much internal energy and poise it took not to burst out laughing. Because he was very serious. And laughing when someone is really angry just isn’t the best timing. I could feel his frustration; it was palatable. And yet… meet Bad Daddy? … That’s just deeply funny. I turned away and walked into the bathroom, trying in the small space of a hotel room to stay turned away from him so he wouldn’t see me stifling my grin and laughter. I knew I had to control it. Had I even allowed myself a smile it was bound to evolve into an all-out giggle fit, so funny was the “Meet Bad Daddy” declaration.

I listened and empathized and calmed him down. We discussed a plan for encouragement of positive behavior and consequences for poor behavior to nudge Page out of her disrespectful phase. And I let the Bad Daddy comment lie, well, for a while…

Several months later when we were getting ready for bed I started doing several small things to purposefully annoy him. After 4 or 5 of these he said, “What are you doing?!” To which I playfully replied, “Trying to meet Bad Daddy.” He immediately knew what I was talking about and said, “That’s not funny!” Though we went on to laugh about just how hilarious it actually was. I mean, what could be funnier?!

This incident is a wonderful example of how some of what seem like the most frustrating or anger-inducing moments of parenting can evolve into the best memories, because the those moments are also full of love and caring and at times immutable humor.

Originally published at chapelboro.com on August 2, 2013