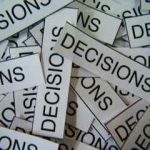 At what age do you let a child make an important decision on their own? This is inevitably a rhetorical question since kids differ developmentally in line with their age, and one’s perspective of “important” differs. But I’ll share one scenario we faced.

When Page was seven-years-old we went to Greece in the summer to visit my husband’s family. For a week we went to an island: myself, my husband Peter, Page, Peter’s mom, and Page’s cousin Will, age six. Peter and I stayed in one room and grandma and the two kids stayed in another room, so we saw the kids a lot but not all the time. As the week unfolded it became clear Will would have unprovoked moments of acting out against Page, such as giving her a quick pinch when he didn’t think anyone was looking.

The plan for the second half of the week was for Peter and I to spend a week alone on the island and the two kids to fly back to Athens with their grandmother. On the morning they were leaving, Peter and I were walking down the hall behind Page and Will, and Will pinched Page, ran ahead a couple of steps into the room and closed the door in her face. Peter saw this and lost it. He started yelling at Will, and also declaring that was it, Page was not going back to Athens to her grandparents’ house, she was staying on the island with us. Peter’s mom was protesting and the scene was loud and chaotic as we walked to the taxi. Page pulled on my sleeve and said, “Mom, I’m not sure if I want to stay here.” So I took Page aside and we sat down and talked. Peter wasn’t certain if we should let Page make the decision; I wasn’t certain either. Not all parenting moments are full of certainty, unfortunately. But I did think this was after all her vacation, and she should be heard at least, and at most maybe even make the decision of how she spent her week. The conversation went something like this:

Page: If I stay here I won’t get to see Papou (grandpa) much this vacation because he hasn’t been here on the island this week. I really want to spend time with Papou.

Tina: OK sweetie, I understand that. Your Papou loves seeing you too.

Page: But I don’t want Will to pinch me or push me or anything. I really like playing with Will a lot when he doesn’t do that. So I want to play with Will at Yaya and Papou’s, and spend the week with Papou without Will pinching me.

Tina: Well, since he’s been doing that for a week even though he gets in trouble when he does it, you have to realize it’s most likely he’s going to keep doing it. You have to have a realistic view of your two choices.

Page: So I can stay on the island with you and Daddy, which is fun and Will isn’t here to bug me, but then I’ll really miss Papou a lot. Or I can go to Athens and spend the week with Papou and everyone and play with Will, but probably sometimes Will is going to bug me.

Page lamented over this decision for a few minutes. It was the first time she had ever had to make a decision that was big plus not an easy decision, i.e., each choice had pros and cons. I assured her either decision was OK, and there was no right or wrong choice. In the end she decided to go to Athens so she could spend the week with Papou. Will acted out some that week, but his mom also decided to go away for a few days with him and let Page have a break from Will and some alone time with her grandparents. As fate would have it, though her Papou was very healthy then and we all imagined he would live decades thereafter, he got cancer about a year and a half later and died before Page ever saw him again. So luckily Page had chosen to tolerate Will and keep her special time with her grandfather.

And Will, let’s not demonize him in this story by the way! He was just a six-year-old kid in a phase that he grew out of over the next year. When the cousins saw each other a year later there were no such incidents. Page loves spending time with Will.

Like Page’s decision, deciding at what age to let your child make an important decision can be a hard choice, with pros and cons, and you’re never quite sure if you’re doing the right thing by letting them decide. But at some point they need to develop these critical thinking skills of weighing complex options and making tough decisions.

Originally published at chapelboro.com on September 5, 2013