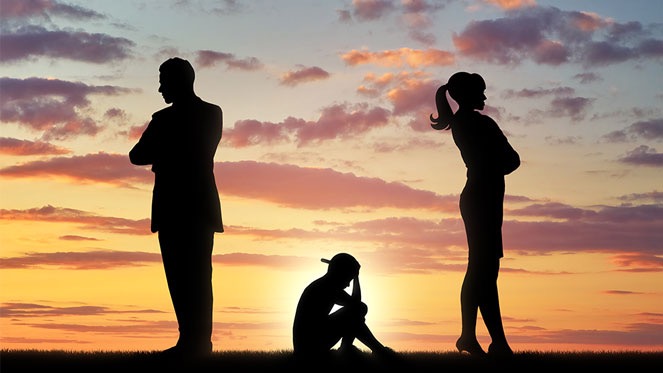 This second article on Cooperative Parenting explores how to avoid putting your child in a loyalty bind. Let’s start with the obvious: what is a loyalty bind?

The effects of loyalty binds are significant. The child becomes very stressed as he tries to play accountant and anticipate and prevent his parents’ negative emotional reactions, all while grieving the loss of the intact family and fearing further loss by making either parent angry at him. Feelings of resentment build with the understanding that he is a pawn in his parents’ conflict game, and that he can’t win and can’t get out. He feels angry but is not free to express this to his parents whom he has to be cautious around now. The child becomes less happy. The spontaneity he once enjoyed with being free to love each parent as he wished is gone. Try as he might to avoid choosing sides, he is sometimes forced to (do I give Dad the message as Mom asked, and make him angry? Or do I not give it to him and make her angry?). The longer this continues the more his self-esteem suffers. Children feel connected to their parents as though they are a part of them, so each time the child experiences a parent belittling or attacking the other parent, it is as though he is belittled or attacked by them as well.

It can be tempting to fantasize life without the other parent in it. Decisions would be much easier and calmer if you could make them all and your child didn’t have to get caught in the middle. But think of all that your child would miss out on: half of the love and influence of the two people closest to him, half the shared memories of his early childhood that only parents can provide, half the learning about himself, his lineage, and his important role in the family line. Plus, for all the problems you have with the other parent, it’s possible that you experience the worst of them (either in reality or in your head) but your child gets a better version. They don’t have the same emotional history you do with the other parent, so their current experiences aren’t tainted by those past wounds. They are better able to learn from the other parent than you are at this point, and let’s face it – the other parent probably isn’t 100% ‘bad.’ You chose to connect with them for a reason and have a child. They have their own skills, knowledge, and talents to share with your child. Being exposed to more than one role model lessens the chance of ending up with a skewed view of the world.

So what can you do to turn it around if you realize you’ve unwittingly been creating loyalty binds for your child? Remember that you are the adult and bear the burden for helping your child with their difficult emotions while keeping your own in check without their help. Reach out for support from other adults when you need to. Say positive things about the other parent – remember that a compliment to them is a compliment to your child. In the same vein, demonstrate acceptance of their other parent and hold back negative feelings about them as you know they cut deep into your child’s self-concept. Above all, support your child’s need to love both their parents. In the long run this helps them love themselves.